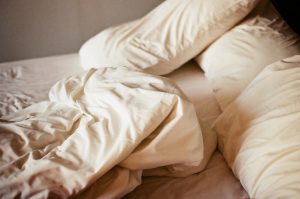 We had been dealing with moths off and on for a month. I thought I had checked everything but obviously not. I mean, the spare bed room is not that big, nor did I think that there would be a food source for them. Well, I was wrong. We finally found their hold out it was a small fruit cake in a decorative tin. I can only imagine that it got swept up and stored without me even noticing it. I will admit that I had been in a real hurry this year so that just goes to show me to stop and take more time. I am sure that I will be able to laugh about this someday, many, many, many years in the future. I’m still finding some residual webs but I think that we have succeeded in clearing them out.
September 27, 2017October 3, 2017 Katherine

We have been going through this trouble with moths, and it is really seriously driving me crazy. I mean, what am I supposed to do? Live with them.

We were originally told that they were waxworms. But my father confirmed that they were most certainly not. And I think that the people who told us that, were either having a laugh at our expense, or they just didn't know what they are talking about, both options are possible.

But I am still struggling to figure out where they are coming from. It turns out that they are not coming out of the comforters we had in storage, though they do have a nest in the room somewhere.

So far we have been using pheromone traps to attract all the males and sends them to a sticky death so they cant fertilise the eggs.